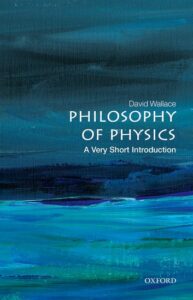 Philosophy of physics is concerned with the deepest theories of modern physics – notably quantum theory, our theories of space, time and symmetry, and thermal physics – and their strange, even bizarre conceptual implications. A deeper understanding of these theories helps both physics, through pointing the way to new theories and new applications, and philosophy, through seeing how our worldview has to change in the light of what we learn from physics.

Introduction
1:The methods and fruits of science
2:Motion and intertia
3:Relativity and its philosophy
4:Reduction and irreversibility
5:Mysteries of the quantum
6:Interpreting the quantum
Further Reading
Index

David Wallace is the Mellon Chair in Philosophy of Science at the University of Pittsburgh, and has joint affiliations with the department of Philosophy and the department of History and Philosophy of Science at Pittsburgh. He has previously taught at Oxford University and University of Southern California. He has worked on many areas of philosophy of physics, including statistical mechanics, symmetry, quantum field theory, and quantum gravity, but he is best known for his work on the Everett (many-worlds) interpretation of quantum mechanics. He is the author of The Emergent Multiverse, (2012).

The Very Short Introductions series from Oxford University Press contains hundreds of titles in almost every subject area. These pocket-sized books are the perfect way to get ahead in a new subject quickly. Our expert authors combine facts, analysis, perspective, new ideas, and enthusiasm to make interesting and challenging topics highly readable.